Dragging Canoe, often called the Tecumseh of the South, was one the Cherokee tribe's most devoted chiefs. He angrily opposed the terms of the deal in which the Cherokee Nation signed away some of their valuable land to the whites and received very little in return. He broke away from the Cherokees in 1776, forming an aggressive wing of the tribe known as the Chickamauga Cherokees. Dragging Canoe strongly recommended that the patriotic Cherokees to join in parting of the tribe. He fought for land that was stripped away from him by the English settlers. 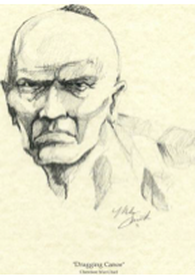